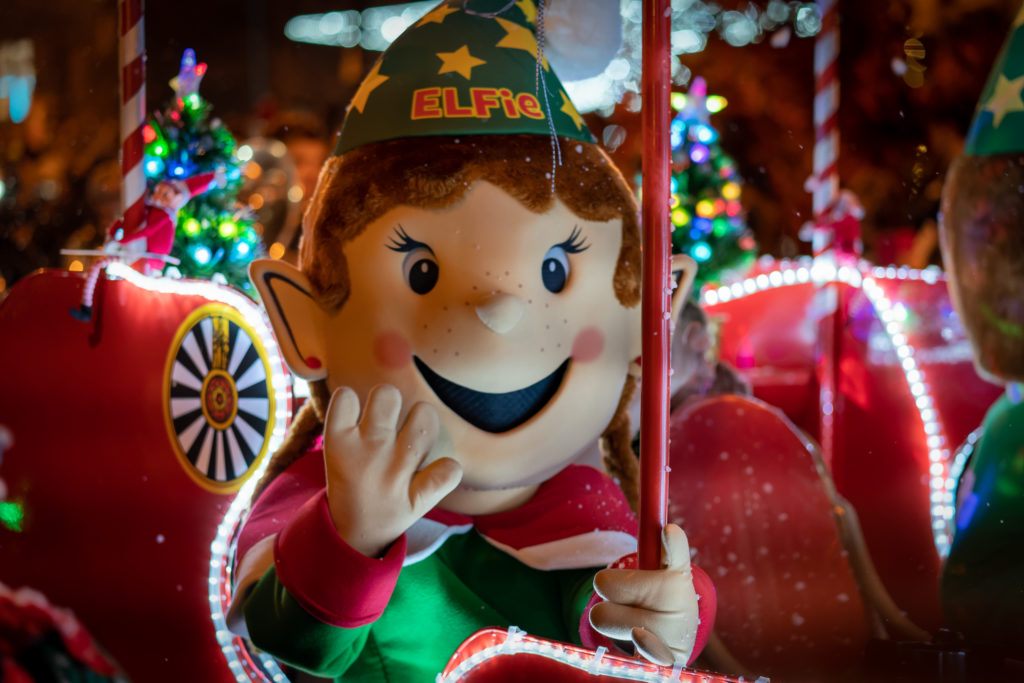 Chester was full of festive excitement on Friday night as around 15,000 people descended on the city centre for the annual Christmas lights-switch on and parade.

Taking place on a Friday instead of the traditional Thursday night, thousands of families lined the city’s streets to catch a glimpse of the ‘12 Days of Christmas’ themed parade, which started at the Town Hall before making its way through the city centre.

Organised by Chester’s Business Improvement District, CH1ChesterBID, in partnership with Cheshire West and Chester Council, this year’s display saw Santa and his elves spreading Christmas spirit throughout the city centre.

ChELFie and ELFie, Chester’s popular Christmas elves, were also stars of the parade, travelling alongside Santa’s sleigh with a snow machine, scattering snowflakes across the city’s streets.

A range of community groups and local artists wowed the crowds with fantastic costumes and performances and Chester’s well-loved brass band lead the parade performing a range of Christmas classics, with lights turning on throughout the city centre as the procession passed through.

Emily Ghazarian, Events Manager at CH1ChesterBID, said: “Having the light switch-on a Friday this year was a break from tradition, but it has proven to be a real success as we saw thousands of people making the trip into the city centre to celebrate the official start of the festive season.

“The 12 Days of Christmas parade always brings so much magic to the city centre and there’s a real community feel to our parade, which is why it’s loved by so many people. It was so lovely to see thousands of people in the city getting excited about Christmas with their families and friends.

“We work tirelessly every year to ensure that Christmas in Chester is a real spectacle and we have already received some really wonderful feedback about the parade with many telling us they though it was the best one yet. The city was packed, and the atmosphere was outstanding – the turnout was an estimated 15,000 people and it gave people a great reason to start their Christmas shopping early.

“The parade also signals the start our range of family-friendly activities that run right through until the first week of January, and it’s a great showcase of how magical our beautiful city is during the holiday season.”

Included in this year’s Christmas events are Storytelling with Santa, which has returned to Storyhouse this year. The attraction officially launches on November 22 and will run every Thursday, Friday, Saturday and Sunday until 23 December.

Chester’s Christmas Market is also back in the heart of Chester until December 22, with more than 70 traditional wooden chalets situated in the city centre selling quality local and regional products.

And ChELFie and ELFie will be out and about in the city centre every weekend until Christmas, handing out magic holographic Christmas glasses and spreading Christmas cheer.

For more information about all the events and activities taking place in Chester this Christmas, visit https://experiencechester.co.uk/christmas-events/