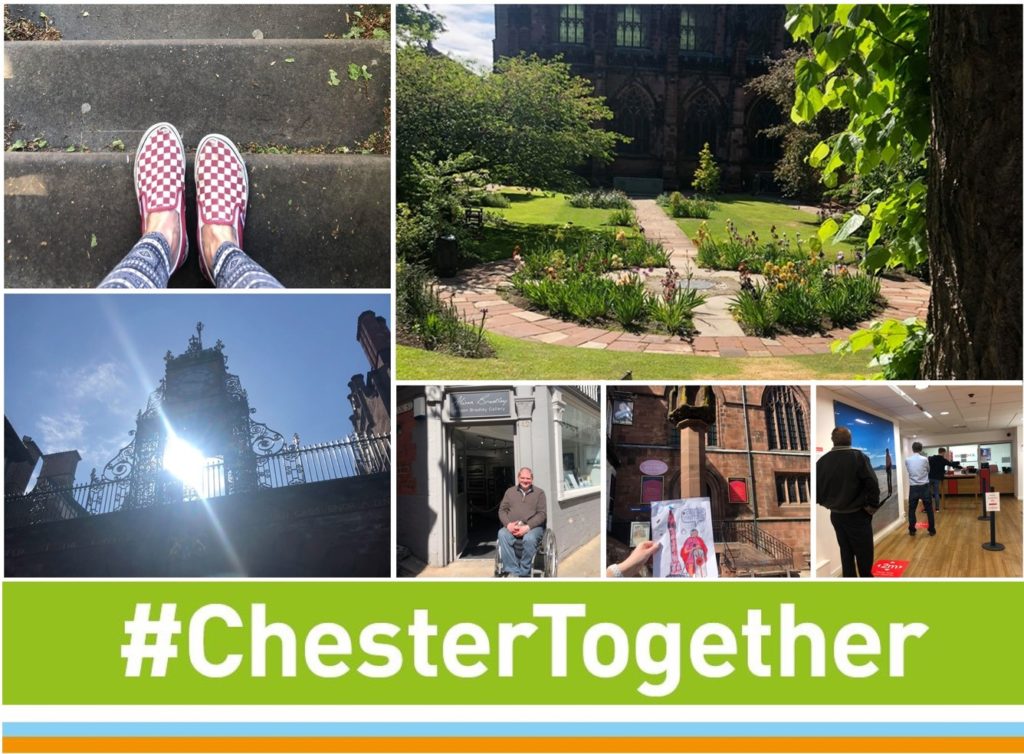 With many visitors to Chester currently unable to pound the pavement in the city centre, I decided to document my most recent trip for essentials to give everyone a ‘real life’ snapshot of the city.  It is worth mentioning that I am a Chester resident and the city centre is my local provision for essentials and exercise. 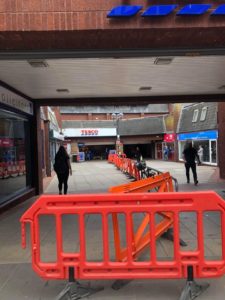 After avoiding a massive shop for a couple of weeks (I found playing ‘Ready, Steady, Cook’ with the ingredients we had knocking around fun…for a while at least), I parked in the Tesco Car Park on Frodsham Street at about 1.45pm. There were no barriers or kiosks in use and plenty of spaces available. The signs reminded shoppers that people can always use this car park for up to 4 hours with a £15 spend in store.

I used the stairs to get to the ground floor and noticed there was no queue to get into Tesco. I wandered down Frodsham Street which was well trafficked by pedestrians, but all appeared to be practising social distancing.

I’ve put off a trip to the bank for months, but could delay no more. I went into HSBC on Eastgate Street where the door was open and there were clear floor markers and queuing systems in place. After being helped at the counter, the main doors were closed as the branch is currently on reduced hours. A very kind team member with a face mask on opened the door for me before giving me space to exit. 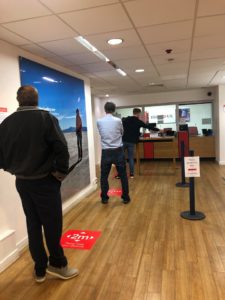 Next stop was a walk down Bridge Street to collect something from my office. To be honest, I did feel a bit anxious before my trip to town and dragged my feet a bit when it came to leaving my house. However, once I was in the city the familiar sights and faces were reassuring and I couldn’t help but smile as I walked in the sunshine.

Bridge Street did not look ‘normal’ but it was a hive of activity! Taxis and delivery services coming and going, contractors doing work with 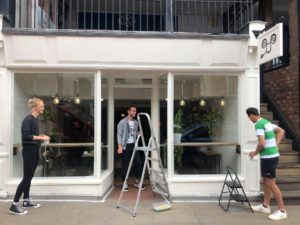 pavements pulled up and sections roped off, and Café doors open with tables outside sharing details of takeaway services. I was pleasantly surprised to see the team at Jaunty Goat working hard repainting the frontage and after a brief chat was told they spent A LOT of hours sanding their work tops and installing safety measures so they can get their takeaway service open soon.

Following a brief (and rather eerie) trip to my office on Lower Bridge Street I headed toward The Cross, with a sunny stop to say hello to Mustie and Leonidas Chocolate café. He has remained open for deliveries of delicious chocolates throughout lockdown. 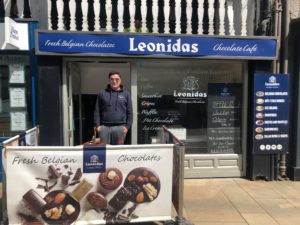 Up next was a socially distanced meet up with Rachel, Chester’s Roaming Reporter and creator of @CH1Chester stories, to hand over some essentials. Jon from Alison Bradley Gallery was outside on Watergate Street and we talked about their plans to re-open. While having a chat from a safe distance I also saw Nikki from Chester Health Store and Julie from Julie Colclough Gallery. The vibe of our conversations was a sense of optimism about the future of the city but recognition that there is a lot to consider and get in place as more people are able to enjoy the city again.

Chats over, it was time to head to Wilko for some key purchases including toilet bleach and kids craft activities (I do live a glamorous life). I ran into the store manager Bec who is always smiling and a breath of fresh air. They had a staff member at the doors, one way system for in and out, floor markings and screens at tills.

After as much delay as possible I finally headed back to Tesco as that was the original purpose for my trip, but not before a quick trip to Eastgate Clock, window shopping in Clarks, and walk on the walls to see the Cathedral Garden. 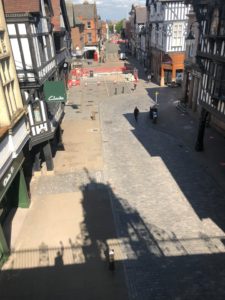 At this point it was nearly 4pm and the queue for Tesco stretched down Frodsham Street just past Hope House Charity Shop. My gut told me to bottle the trip and head home without my groceries, but my family would not have been impressed. So I joined the queue and after less than 8 minutes was inside spraying the handle of my trolley and using the hand sanitiser supplied!

I was able to get EVERYTHING on my list and noticed the clothing section was busier than on previous trips and that the flours available were more varied and in larger packages. My mother in law was struggling to find self-rising flour but I was able to pick her up a 4kg bag! I am expected a homemade cake or two in return.

The queuing system was well managed by the team at Tesco and aside from some people forgetting to follow the arrows on the floor, it was an overall pleasant experience. I was even able to have a lovely conversation with the woman on the till which was a bit of a change. I found that in the first month/6weeks the atmosphere was very somber at the shops. Now people are craving human interaction and those who are comfortable using the city services are once again smiling at each other and making eye contact. 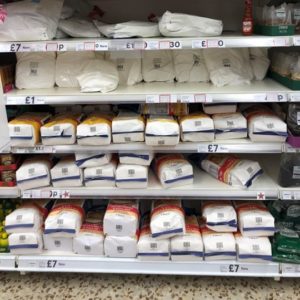 One thing that has remained the same, I can’t walk through Chester without seeing people I know and feeling a sense of community. By the time I got home it was past tea time and despite my two small children breaking into all my bags and messing with my organisational system, I had a sense of satisfaction that my cupboards and freezer were now full and the city I love will survive.

And before anyone fires back saying I did not support independent shops, I have had deliveries from Francis Thomas, Chester Market, Paysan, Falafel Xpress and many more of our cities independent businesses. For me the message is not about indie vs national, it is about how the city functions as a whole organism supporting one another.

NOTE: I did see one person begging on Frodsham Street. I recognised him from pre-lockdown life and stopped to speak to him asking if he had been offered accommodation. He told me he hadn’t and that he was sleeping on the streets. I offered to reach out to For Futures for him as I understand they have beds available and that many of the restaurants have been providing meals through Soul Kitchen. He did not take me up on the offer of reaching out to For Futures and followed up telling me that they had been in touch and he had their information. I also saw a group of 5 men in their 20s/30s who I recognised as part of the city’s homeless community, and a group of 5 teenage lads on bikes who were not practising social distancing.

About the author: Emily Ghazarian is the Marketing & Events Manager for CH1ChesterBID, the city centre’s Business Improvement District. Originally from California, USA Emily attended the University of Chester as an exchange student and the University of Liverpool where she achieved an MA in Politics & The Mass Media. She has been a resident of Chester for nearly 20 years and has a background in hospitality, fundraising, events and marketing.