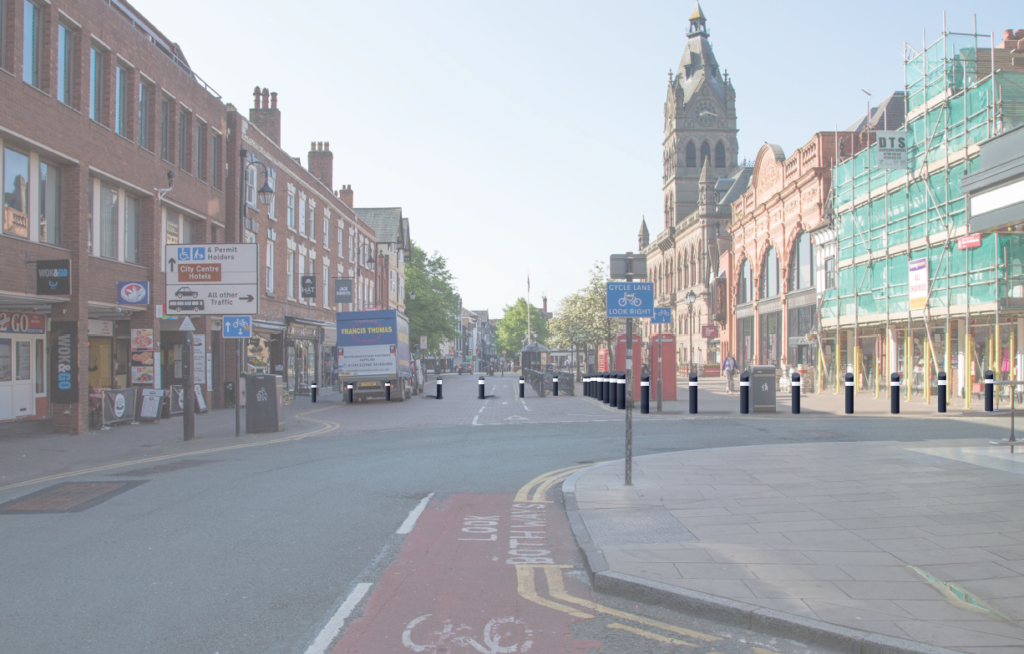 Work has begun to make Chester city centre an even safer place to be in the future.

The Council is working in partnership with Cheshire Police and the other emergency services to install modern, computerised bollards at various, strategically-placed, locations in the city centre over the next six months.

These powerful bollards are robust enough to halt vehicles in their tracks, preventing cars and vans from being used as weapons to attack crowds. They will help make the city of Chester as secure as possible.

There is no specific threat against Chester.  But the Council is heeding the advice of police and joining other authorities across the country in improving the protection of busy urban areas.

Councillor Karen Shore, Deputy Leader of Cheshire West and Chester Council and Cabinet Member for Environment, Highways and Strategic Transport, said: “While we are currently facing the threat Covid-19 poses to our health, we must also be mindful of other potential threats to our way of life.

“In recent years there have been incidents around the world where terrorists have used vehicles to harm people. By installing this robust equipment in Chester, we are protecting residents and visitors from people intent on using vehicles as a weapon.

“I can reassure people that there is no specific threat to the city of Chester.  But, unfortunately, we are one of many cities around the world having to improve security in the light of new threats to democracy and our way of life.

“The bollards have been carefully designed to blend into the unique historic heritage of Chester.”

The bollards would be activated during large scale public events to protect the public, or in response to intelligence or a heightened threat level.

Assistant Chief Constable for Cheshire Constabulary Matt Burton said: “We’ve been working with Cheshire West and Chester Council for the past couple of years to develop a vehicle lockdown project that will protect crowds of public during major events from a vehicle borne threat, and I’m pleased that we’re now ready to implement our plans.

“Attacks such as those at the Manchester Arena and at Westminster Bridge and London Bridge remind us that the threat is real and persistent, and we know that the use of vehicles in such attacks is increasingly common.

“Having said that, there is no intelligence to suggest that Chester is at any specific risk. This measure is just part of an overall protective security plan designed to keep people safe in Chester city centre.

“This plan has also included specialist training for staff in the city’s businesses, shops, faith groups, and council departments. Together with Project Servator – a policing tactic to disrupt a range of criminal activity, including terrorism, while providing a reassuring presence for the public – I’m confident that Chester is as protected as it’s ever been.”

Dave Kitchin, Cheshire and Merseyside Head of Service for North West Ambulance Service, said: “This is a really positive step for the City of Chester and something that NWAS are fully supportive of.

“Over the last 10 years our senior leadership team have worked closely with Cheshire West and Chester Council – together with police and fire & rescue service emergency partners – to continually improve public safety. The introduction of security bollards is seen as a positive development that will have minimal impact on emergency incident response, yet significantly reduce the threat of a vehicle related incident impacting on the city’s shopping activity or planned cultural events.”

Approved vehicles and blue badge holders will continue to have daily access to the city centre once the bollards are built, in line with the current traffic regulation order. Delivery times for businesses will continue as normal.

Roads will be closed to public vehicles during events. Emergency vehicles will be able access the city centre when necessary.

The Council is working in partnership with ATG Access and Ringway to install the bollards this spring and summer, with the project being fully completed by the autumn. Social distancing will be observed by the teams carrying out the installation work which begins during the lockdown period.

Further information about necessary road diversions will be provided as the project progresses.