We Will Remember Them

We Will Remember Them
Posted in Chester News 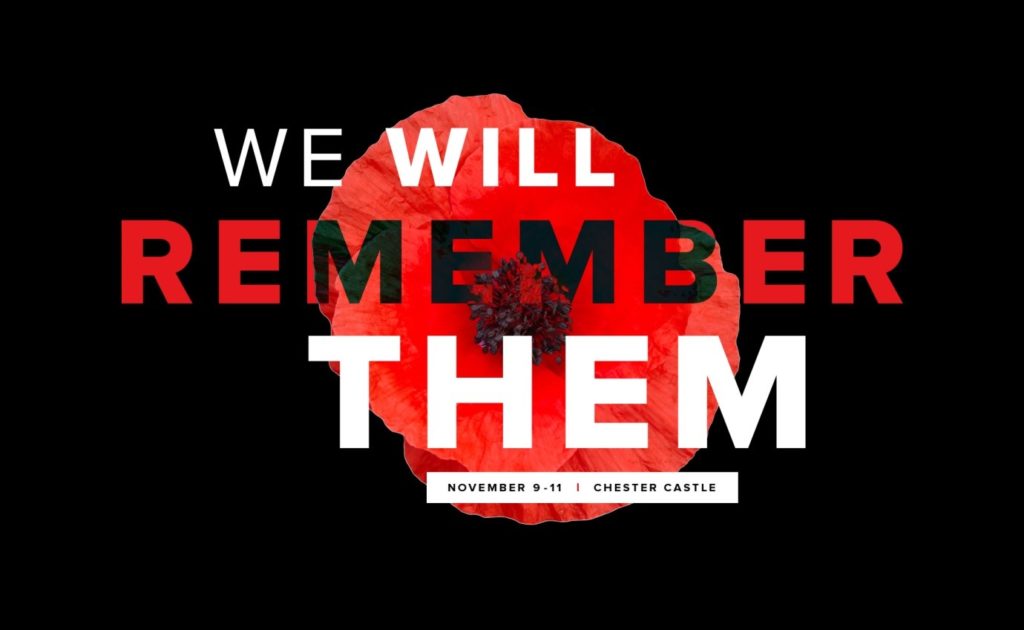 Almost 1,000 people from the City of Chester gave their lives in the Great War.  They will be remembered when their  names are projected onto the Medieval walls of Chester Castle, which was a Cheshire Regiment base at the time.

The event will take place every night over the weekend of the 9th to the 11th of November 2018, to mark the centenary of the Armistice.

This is an informal event organised by the Chester Civic Trust and Chris Matheson MP.  The event has been made possible by the generous support of local businesses and organisations, who have donated time, equipment, facilities and expertise as a mark of respect for those who made the ultimate sacrifice for their country.

We hope people will take the time to attend the event, pay their respects to the people named on the Roll of Honour, and visit the WWI exhibition in the Military Museum.

Niall Macfadyen of Chester Civic Trust Heritage Subcomittee said “Chris Matheson approached the Civic Trust with a proposal that the City should mark this important event in our history and it was suggested to him that projecting the names of the fallen onto Chester Castle would be an appropriate tribute.  Chris was supportive of the idea and negotiated projection rights with English Heritage (who own the Castle) at a meeting on the 21st September.  That gave us the green light to get cracking with delivering the project and we have been overwhelmed by the number of people and organisations that have come forward to offer support at such short notice”

Chris Matheson Said “”When the Civic Trust told me they wanted to do something for the Armistice, I was keen to move it forward with them. I am passionate about the castle and about bringing it back into use at every opportunity – and of course I am always keen to work with Dr Macfadyen on his projects in the city.

“The best thing about this project is that it has involved many people who have come together to make it happen – including council staff, local councillors, local freelance designers, Big Heritage, local museums, charities and businesses – and of course the Civic Trust.  It goes to show that when funding for this sort of thing has been cut to the bone, when we come together we can still do great things.

“The next piece in this jigsaw is local residents, who we need to help us with the set up and stewarding of the event over the three nights – if you are interested in finding out more, please email armistice@macfadyen.net.”

We hope people will come and watch the video projected onto the walls as the list of names unfolds.  It will feature images of Chester men in the trenches and other relevant scenes.  The video lasts for approx. 30 minutes.

On Saturday 10th the video will be projected from 6.00 until 8.00, and at this time the military museum will also open especially for the evening, so people can visit their WWI exhibition. Hot drinks will be available for purchase, with any profits going to SHARE, the Chester Homeless charity.  It is a great sadness that many ex service men and women still find themselves homeless after serving their county.

On Sunday 11th November, the video will be projected from 6.00 until 9.00. At 8.30 after the last showing, we will play some of the music that the men and women who were sent to war would have enjoyed at the time. Hot drinks will be available for purchase, with any profits going to SHARE

After the 11th, the video will be on display at the Military Museum, as part of their WWI exhibition

The University of Chester have generously allowed us to use their car park opposite the castle walls for the event.  If you come by car, please park on the main (CWAC) Castle car park, and walk to the smaller lower University car park via the propyleum gate. The University will open the gate below the walls, allowing disabled access from the little roodee car park.  The names will be projected in silence, apart from a showing at 7.00 pm on Saturday evening, when the names will be read out, giving a chance for people with visual impairments to pay their respects whilst listening to the names.

We hope the people of Chester will take the opportunity to get involved in this event.  The History Hub @ Grosvenor Museum are holding a draft list of the names of the fallen, as is the Military Museum.  Members of the public are invited to come and read the list to ensure that their relatives are named.  The deadline for additions to the list is 26th October.  If you prefer to send comments by e-mail, send them to armistice@macfadyen.net.  The list will be available on the Chester Archaeological Society Web Site from Saturday Morning, if you are unable to visit either museum.   We are also keen to use any images people may have of relatives who fell in the Great War.  If you can provide good quality images please e-mail them to armistice@macfadyen.net or you can bring in original photographs to the History Hub to be taken for scanning.  We will make every effort to include your images in the video projected on the Castle wherever possible.  The deadline for images is the 19th October, to give us time to compile the video.  We already have a lot of suitable images, but would love to include your relatives as well.

This event has only been possible with the generous support of many organisations.  We would like to thank

These people who suffered and died were Chester residents, each with their own stories.

Mary Beatty from Boughton, who lost her three sons Hugh , James and Peter.

Two “Boys” from the Cheshire Regiment, who died at the age of 17. Alfred Burton who’s parents came from Stoke on Trent and Cecil Owens from Boughton Heath

Margery Annie Tucker of the Women’s Royal Air Force, who died in a railway accident

We will remember them.

The post We Will Remember Them appeared first on Experience Chester.